Apparitions of the Future: Space Time Mysteries and Strange Phenomena 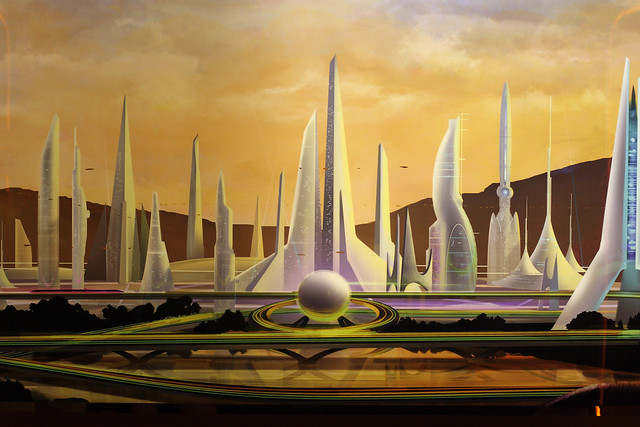 Humanity’s interpretation of the appearance of what we call “ghosts” has largely remained constant throughout history. In general terms, when the apparent apparition of a person who is, for lack of a better term, “temporally misplaced” occurs (i.e. the apparition appears to be a deceased individual), we presume that what we’ve seen is a spirit, likely stemming from some energetic presence that emanates from the disembodied soul of of a once-living person. Thus, our study of such temporal apparitions has remained what we call “supernatural,” and attempts at communicating with ghosts most often fall under the categorization of conversation with “the spirit world” or “the other side.”

In truth, there are a number of logical “leaps of faith” that must occur for this argument to become feasible, a point I outlined in my recent article at the Mysterious Universe website that dealt with similar subject matter. Namely, to suppose that ghosts are indeed spirits of the dead requires us to presuppose that things such as the human soul not only exists, but that it could manifest as some quantifiable presence, in an energetic sense, and entirely apart from the human body. A simple question one could ask in challenging this notion (and one that has indeed been offered a number of times before now) is why ghosts, if they are energetic manifestations of the disembodied human soul, nonetheless appear wearing clothes? Indeed, the stories of nudists in the spirit realm remain in the minority when compared with the larger body of stories constituting our knowledge and conception of what “ghosts” are.

Further evidence against the disembodied soul argument arises from the examination of reports that involve what is called Time Slip Phenomenon, where the witness experiences not only an encounter with a disembodied apparition from the apparent past, but an entire environment that seems to be misplaced chronologically (there are a number of reported cases that seem to indicate such a thing can occasionally take place, albeit given some set of unknown physical conditions that would be necessary to allow it). Obviously, there may be far more to the nature of “ghostly apparitions” than most of us have taken time to consider… but could these same anomalies present in the literature help us to reveal new mysteries about our universe? Furthermore, though we can easily apply such things to apparitions and phenomenon that apparently has to do with our past, could the same line of thought be applied to strange phenomena emanating from our future just as well?

I’ll begin by saying, right off hand, that there is much–far too much, in fact–to be said about the topic I’ll be grappling with today than can be featured in a blog post of any reasonable length. Thus, while today’s musings will be a bit peripheral, rest assured that on down the road this author will be tackling the theory I’m expressing in its infancy here in much greater depth. In fact, after a few talks with my publishers this weekend at the Paradigm Symposium, an event I hosted with Scotty Roberts in Minneapolis, Minnesota, there may be some prospects in the works already… but I digress.

Let’s return to the inconsistencies that begin to emerge with ghostly phenomenon, at least in terms of a spirit manifestation being the energetic presence of a deceased soul. Indeed, it seems strange that the majority of spectral encounters still involve the appearance of clothing and other objects just as well; for instance, during a discussion I had with the owners of a home where a Civil War era massacre had occurred, one young man told me of an apparition that would repeatedly walk through their home, suited in full confederate soldier’s dress, that on one occasion turned, raised its rifle, and aimed it at him before disappearing! If the presence of clothing is difficult to muster here, the heavy components of the flint-lock rifle this soldier carried are again curious for their overt presence here in apparitional form.

By the same token, we can’t dismiss outright the stories of ghostly appearances. They are so rife and prolific throughout history that the notion of ghost is not merely archetypal; it is all but integral to our cultures worldwide, and to our identities as humans. The ghost represents proof in the recesses of the witnesses’ mind that, while terrifying on the exterior, some essence of what we call the “soul” continues on after death. Thus, the ghostly archetype is both frightening to us, and it is refreshing. It helps remind us that we are more than the skin, muscle, tissue, and bone that comprises what we call our “self.”

Not to detract from any of this, we must argue all the same that the curious manifestations of clothing and apparel that are concomitant with spectral appearances seem to point to something else underlying the phenomenon, likely one that involves the aforementioned “time slip” phenomenon, where rents in space-time could cause spillover from one temporal point in what we perceive as chronological time into another. This interpretation does have its problems, however. For instance, we also hear stories of ghosts that interact with witnesses, and sometimes refer to things that seem to indicate obvious knowledge, on their part, that they are deceased! One tale related to me years ago dealt with a hired crew brought into an old home where renovations were being carried out, following the death of the home’s elderly former owner. One late afternoon during the restoration process, one of the renovators, while standing on a ladder painting an area of wall near the ceiling in a hallway within the home, claimed he heard an elderly woman’s voice state clearly that, “I don’t like what you’re doing with my home!” Turning around, he met the piercing gaze of the home’s former owner, standing there as though she were indeed still very alive. Though her admission stated nothing that proved knowledge of her own death, she nonetheless remained capable of perceiving and interacting with limited portions of her environment in this case, if the story is to be believed. An even finer example came during my research for the book Reynolds Mansion: An Invitation to the Past, in which a psychic claimed that she met a young girl, who said her reason for being at the place was due to the fact that she had been embalmed there. Strange though this sounds, research into the history of the home later proved that the house and its grounds had been home to an undertaker in the Asheville area, and that embalming had taken place in one of the adjacent buildings during part of his long tenure at the mansion.

There are problems with a story such as this just as well, however. For one, our only evidence is the testimony of a psychic… and one who is reputed to be a rather good one, I’ll add; her name was Kristy Robinett, and on the whole, her work has been well received by the psychic community. Still, without any way to quantify the abilities of any person claiming to possess extra-sensory powers, we are left to make a leap in logic if we are to commit to belief in her abilities on pure faith alone, and then justify the evidence by using this as “proof.” Doing such is similar to the pseudo-scientific guesswork that involves use of consumer-grade electromagnetic field detectors for purposes of divining the unquantifiable energies produced by a disembodied soul; the very notion that a device created for detecting stray EM radiation escaping from microwave ovens or fluorescent lamps could also detect a disembodied aspect of human consciousness is absurd… and even if this were the case, how do we prove what the device is actually detecting? Again, the flaws in logic here begin to become quite apparent.

But to reiterate, my purpose for bringing this all to the table is not to play the role of the debunker; quite the contrary, I choose instead to borrow from Sherlock Holmes’ axiom, and quote Doyle’s famous sleuth in saying, “when you have eliminated the impossible, whatever remains, however improbable, must be the truth.” Once we deconstruct the logical fallacies that surround our interpretation of ghostly phenomenon, we can begin to better assess the true nature of what may be occurring when a person sees an apparitional form. Thus, while I cannot commit to belief on such grounds, my intuition tells me nonetheless that ghostly phenomenon may indeed be something quite different from what our cultural interpretations over the last several centuries have allowed us to believe. In all likelihood, we are probably dealing with some variety of strange phenomenon that, in truth, has more to do with space-time illusions, which occur as a byproduct of “dimensional” rents in the fabric of what we perceive as chronological past, present, and future.

Looking ahead, we might surmise that if apparitions of what we perceive to be the past occur, then there should be apparitions of the future that become present just as well. There are two possibilities that come immediately to mind here, which would explain the apparent lack of “future apparitions”: I am careful to point out references to our future as being “temporal” or “perceptual” on a human level for a number of reasons. Namely, I feel that much of what we perceive about the universe around us has less to do with what actually is, and more to do with how humans perceive their surroundings. Again, relativity theory helps define inconsistencies in the physical universe that, based on how humans perceive certain natural phenomenon, show that the universe is not always what it appears to be. Time dilation is my favorite example of this, but is far from being the only evidence that there is more to the universe than what our perceptual limitations will allow us to know. Indeed, it may be that certain varieties of strange phenomena are artifacts that emanate from either our temporal past, which are filtered through and manifest as an energetic presence of unknown quantity that human perceptual abilities are capable of perceiving. Much the same, very similar phenomenon might occasionally occur in terms of artifacts or apparitions from our temporal future, as well (i.e. some UFOs and related phenomenon). Furthermore, it is my contention that such space-time anomalies might occur in the complete absence of there ever having to be a literal, physical device or system that would allow the overtly dorky, outmoded notion of physical “time travel.” Quite simply, it probably just isn’t as simple as that… and pardon my redundancy in saying so on these terms.

In conclusion, the perceptual limitations of the physical human body may indeed impose a number of constraints on our perception of space-time, though occasionally certain natural (or for all we know, some variety of controlled “unnatural” phenomena) may be capable of producing strange temporal artifacts that mislead us, based on our inability to measure and quantify them. Thus, culture and our more basic human perceptual constants come into play, topped off with a healthy spattering of faith-based leaps in logic, which effectively produce a culture of misrepresentation that surrounds strange phenomenon. Given the scope of this brief essay, far more could indeed be said of the fact that humans may occasionally perceive apparitions of both our past and our future. But for now, one simpler truth does begin to emerge: It’s of little wonder why the opposing forces of “scientific skepticism” and “open-minded belief” continue to war against each other… in truth, both sides are probably very wrong, with each woefully married to their own cultural and perceptual stereotypes, which they supplant in the place of anything they can truly know with certainty. In truth, there is far more to this grand cosmic picture than any of us are probably seeing.